This work is realized by sounds created by touching one's ear.

The members of the audience, through their own listening inclinations, become performers.

Therefore, this music can be heard by only the performer themselves. Recording is also impossible.

The objective of this work is to encourage each performer to devise unique performing techniques in order to create interesting music.


This work was premiered at the creative music festival in Hiroshima on August 23, 2003. On the occasion of a premiere, it was performed by all members of the audience after Daisuke Terauchi explained the performance method.  In the event that this work is performed in a situation similar to that explained above it is best to decide on the duration beforehand. 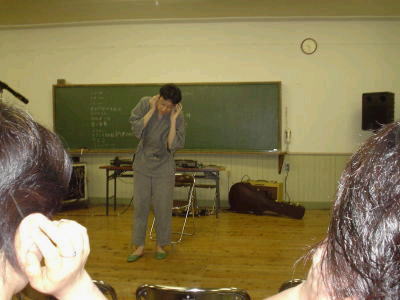 "Ear music" at Ueno no mori art festival in Oita Japan, November 2005(10.4MB)
Daisuke Terauchi (Explanation and performance)
All audience (Performance)
Sorry, this is the performance in Japanese.